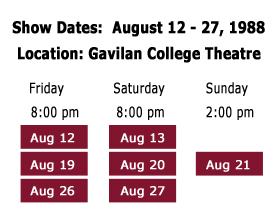 Camelot was one of the most popular Broadway shows of the 1960s. Its original cast album was one of the top selling albums of the year. Julie Andrews and Richard Burton are famous names that have been attached to the show, providing a memorable soundtrack  which included songs such as The Simple Joys of Maidenhood and If Every I Would Leave You.

Guinevere, King Arthur’s lovely wife, encourages him to establish the Knights of the Round Table. As the Knights grow in fame, Lancelot Du Lac becomes the most celebrated of all of them, and rumors begin to circulate about his affair with Guinevere. Can Camelot be the idealistic place of Arthur’s dreams?

Music by Frederick Loewe
Book and Lyrics by Alan Jay Lerner
Based on The Once And Future King by T.H. White