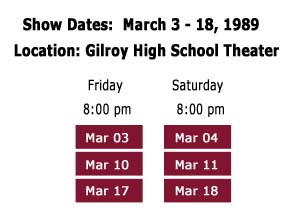 One of the quintessential “Hey, let’s put on a show” musicals, which boasts one of the most beautiful scores ever written, by Richard Rodgers and Lorenz Hart, including such timeless standards as “The Lady is a Tramp”, “Where Or When”, “My Funny Valentine”, and “I Wish I were In Love Again”.

A group of teenagers are left to their own devices as their parents leave for the summer to hit the vaudeville circuit. However, problems arise when the local sheriff vows to send them to a work farm unless they prove their mettle. Within two weeks, the group pushes forward by doing what they do best: putting on a show. A wealthy Southern financier arises but only under the condition that the two black kids be removed from the show. The kids are outraged, but the show must go on, and — in a triumphant tale of reconciliation, retribution, and romance — it does!