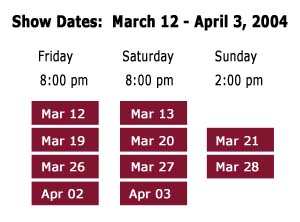 One of the biggest movie musical hits in recent memory now bursts onto the live stage.
When Ren, a newcomer from Chicago moves to a small farming town and sets his cap for the preacher’s daughter, he isn’t prepared for the rigorous local laws, including a ban on dancing, with which the reverend is determined to control the youth of the town. With many of the locals eager to believe the worst about the new kid, Ren tries to set up an end-of- the-year dance while still saving his reputation.