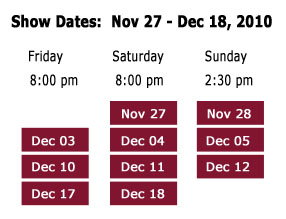 Slamming doors, sexual dalliances, misdirections, and many plates of sardines make Michael Frayn’s Noises Off  “the funniest comedy ever written.” It follows a hapless troupe of actors presenting the sex farce ‘Nothing On’. With a burglar who doesn’t know a television from a microwave, an actress who keeps losing her contact lenses, and a web of romantic entanglements, the action degenerates from infighting among the cast and crew into open hostility that is just as funny behind the scenes as from the audience.