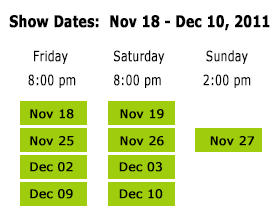 Meet the Tuttle’s and the Weldon’s, two average New York couples. David Tuttle is moonlighting as a department store Santa so that he can buy his wife a fur for Christmas. He tells her he’s working late at the office, but she finds out he isn’t at the office. A suspected other woman, hypnotism, the notorious Santa burglar Kris Kreigle and his gun toting fiancée, and a confused policeman add up to a rollicking tale that is hilarious Christmas entertainment.