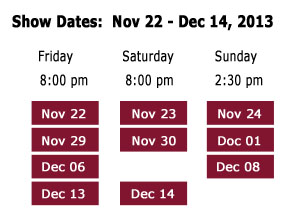 Do you believe? Kris Kringle (could he really be Santa?!) living in a retirement home? Retirement can’t keep Kris from bringing us the true meaning of Christmas. By happenstance he lands a job working as Santa Claus for Macy’s and unleashes waves of good will with their customers and throughout the commercial world of New York City by referring customers elsewhere. Seen as deluded and dangerous by Macy’s vocational counselor, Kris ends up in a court competency hearing. Especially at stake is one little girl’s belief in Santa. Join us and have your heart warmed – just in time for the Holiday Season.