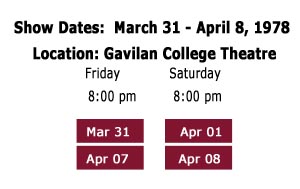 G.C.T. is proud to present the delightful comedy Play it again, Sam by Woody Allen this Spring. The hero in the play has this thing about Humphrey Bogart and wishes that he has some of Bogey’s techniques with beautiful women. This play combined the best of Woody Allen and Humphrey Bogart.

The New York Times called this play “A hilarious evening. A cheerful romp. Not only are Mr. Allen’s jokes — with their follow ups, asides and twists — audaciously brilliant, but he has a great sense of character.” The New York Post praised it as “A funny likeable comedy that has a surprising amount of wistful appeal.” ABC-TV summarized it as “A show that makes you glad all over.”