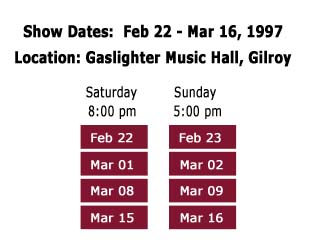 Bursting with the rambunctious energy of the original MGM film, Seven Brides For Seven Brothers is all boisterous fun and romance that harkens back to the glory days of the movie musical. A truly rollicking adventure that teaches that it takes a bride to turn seven unshaven unkempt brothers into manly gentle men and to turn desire into romance.

Set in Oregon in 1850, Seven Brides For Seven Brothers tells the story of Millie, a young bride living in the 1850’s Oregon wilderness. Her plan to civilize and marry off her six rowdy brothers-in-law to ensure the success of her own marriage backfires when the brothers, in their enthusiasm, kidnap six women from a neighboring town to be their brides.