Lend Me A Tenor 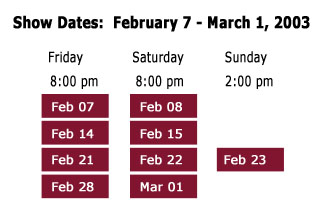 The Cleveland Opera Company has a world famous guest artist coming for their gala opening…but he arrives too late to rehearse with the rest of the company! Through a series of hilarious mishaps, the exhausted star is given a double dose of tranquilizers which, when mixed with the booze he consumes, causes him to pass out cold! The director convinces his own assistant to don the star’s costume, take his place, and dupe the audience into thinking they are watching the star they came to see, thus saving the gala. He succeeds admirably, but our star has now come to and put on a matching costume! Now we have two Othellos appearing and disappearing, being pursued by the star’s angry wife and two aspiring young women in only their lingerie, each one convinced they are with the “real” star! A wonderfully funny farce with some adult situations.