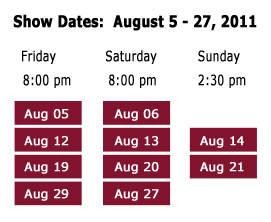 The national debate over science and faith in the classroom comes to a head as a schoolteacher is accused in 1925 of disobeying the law against teaching evolution.

Playwrights Jerome Lawrence and Robert Edwin Lee wrote this drama, (not a docu-drama or a political treatise), about the right to think in the McCarthy era and based it on the famous 1925 Scopes Monkey Trial, in which Tennessee schoolteacher John Scopes was arrested for teaching Darwin’s theory of evolution in violation of state law. Scopes deliberately courted arrest to challenge what he and his supporters saw as an unjust law, and the trial became a national cause when The Baltimore Sun, represented by the famed (and atheistic) journalist H. L. Mencken, hired attorney Clarence Darrow to defend Scopes. The prosecuting attorney was crusading politician William Jennings Bryan, once a serious contender for the Presidency, now a relic of a past era. In both the play and film versions of  Inherit the Wind, the names and places are changed, but the basic chronology was retained, along with most of the original court transcripts. John Scopes becomes Bertram Cates; Clarence Darrow is Henry Drummond; William Jennings Bryan is Matthew Harrison Brady; and H. L. Mencken is E. K. Hornbeck. Dayton, Tennessee is transformed into Hillsboro — or, as the relentlessly cynical Hornbeck characterizes it, “Heavenly Hillsboro.”

The play is known for having the best witness-stand confrontations ever on stage.