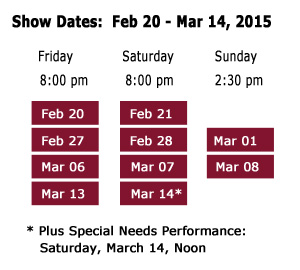 Based on the Dreamworks film by the same name, Shrek, is a hilarious musical about everyone’s favorite ogre.

In a faraway kingdom turned upside down, things get ugly when an unseemly ogre–not a handsome prince–shows up to rescue a feisty princess. Throw in a donkey who won’t shut up, a villain with a SHORT temper, a cookie with an attitude and over a dozen other fairy tale misfits, and you’ve got the kind of mess that calls for a real hero. Luckily, there’s one on hand … and his name is Shrek.