South Valley Civic Theatre (SVCT) has presented live theater to patrons from the South Bay and beyond for over 50 years! It is the resident theater company of the Morgan Hill Community Playhouse with a second, smaller performance venue, Limelight, at the Gilroy Center for the Arts.. Each annual season features five productions at the Playhouse, typically including a large musical with an all-age cast, a smaller and/or perhaps more modern or less well-known musical, a teen musical, a children’s musical, and a non-musical comedy or drama. Limelight features three comedies or dramas a year with smaller casts.  We strive each year  to create a balance of classic and contemporary theater that showcases the talents of our acting community and captivates our audiences.

SVCT’s roots date back to 1969, when Gilroy Community Theatre (GCT) was  established by Gilroy residents Al and Frances “Pinky” Bloom and a small group of dedicated volunteers. GCT’s first show was Come Blow Your Horn, in September, 1969. GCT became a nonprofit 501(c)3 organization in 1974.  The “Theater Angels Art League”, a precursor to today’s “Gilroy Arts Alliance”, initially served as the fund-raising/auxiliary arm of the theater and typically provided an opening night reception for each production.

Initial productions were typically mounted at Gavilan College (usually three a year) and, as GCT slowly became profitable, they began to give back to the community. They established a scholarship fund for Gilroy High School and Gavilan College students in 1975 and donated draperies and other equipment for the theater facilities at Gavilan College. In turn, Gilroy Unified School District and Gavilan College provided free venues for their productions. At this time, GCT also started setting aside money in anticipation of a permanent future home in. In 1978, GCT was honored by the Gilroy Chamber of Commerce as one of three outstanding clubs in Gilroy. This type of community-based collaboration allowed GCT to begin to set aside money in the hope of establishing a permanent home.

In 1983, George Costa joined GCT as its Managing Director.  Previously he had served as producer and director for the San Jose Civic Light Opera (SJCLO), which later was renamed American Musical Theatre of San Jose. Costa was responsible for SJCLO’s tremendous growth and status from 1963 until 1981, and his skills and experience were important factors in GCT’s continued growth over the next few years.

However, the early 1980’s were also tough times financially for GCT, with ambitious productions and small audiences creating an ongoing budget deficit. Board members frequently fronted production costs, and worries grew about the continued viability of the organization. Two pivotal events in 1985 turned GCT around: Russell Hendrickson, of Center Stage in Gilroy, generously dedicated two performances of The 1940’s Radio Hour to benefit GCT. Then a highly successful summer production of Annie finally moved GCT  into the black.

In 1985, the GCT board voted to expand performance locations to include Hollister and Morgan Hill and. to reflect the broadened coverage, they changed their name to South Valley Civic Theatre (SVCT). The first show performed in Morgan Hill was Same Time Next Year, in December, 1985, and the first planned for Hollister (but moved to Gilroy because of flooding) was They’re Playing Our Song, in March, 1986.

In 1991, SVCT identified what they hoped would become their permanent home in a former nightclub in Morgan Hill’s Tennant Station shopping center. The City of Morgan Hill provided SVCT with a $5,000 redevelopment grant, and SVCT members spent their evenings and weekends painting, furnishing, and wiring their new playhouse. The South Valley Playhouse opened with a children’s performance of Narnia in October, 1991. However, just four years later, the property was sold and SVCT found itself once again homeless.

For the next decade, SVCT fell back to performing in diverse venues: Gilroy High School, San Benito High School, Live Oak High School, the Old Gilroy Hotel, the Good Food Company Morgan Hill, the Pumpkin Patch in San Martin, Gavilan Theater, and even Rosso’s Furniture store. Rehearsal space ranged from the back of a paint store in Gilroy to the community room in a Morgan Hill mobile home park. SVCT membership continued to grow slowly, although show attendance was sporadic as patrons struggled to follow where SVCT would be performing next.

From a Church to a Playhouse: 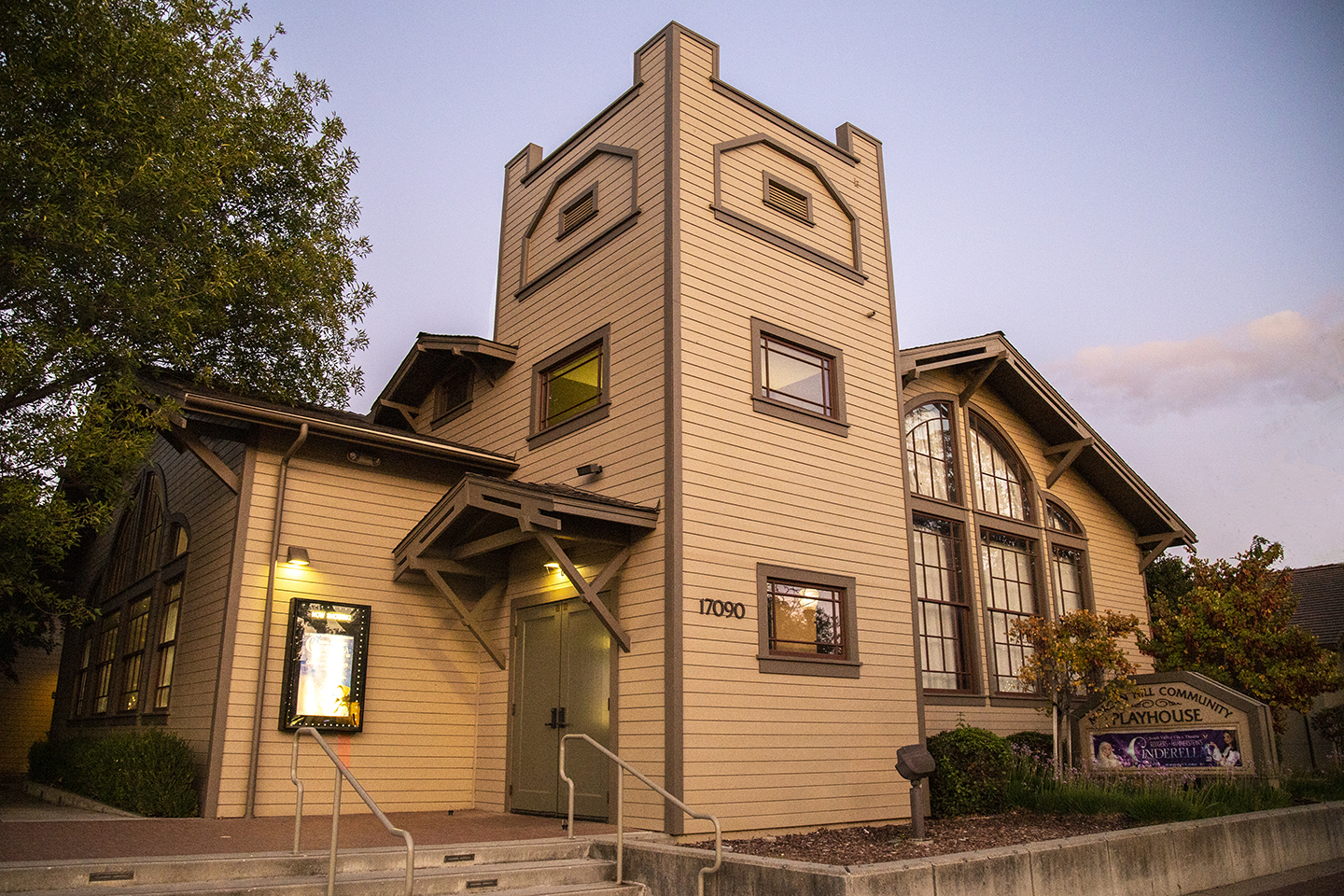 In 2001, as the City of Morgan Hill embarked upon a major redevelopment project to build a Community and Cultural Center in downtown Morgan Hill. SVCT collaborated with the city to have a 1920′s church, which was already on the property, moved to the corner of the campus and refurbished as a modern playhouse.

In January, 2009, SVCT held a 40th anniversary gala celebration! Among those in attendance was GCT co-founder Pinky Bloom.

SVCT celebrated its 50th anniversary in 2019! There was much to celebrate: With a permanent home, SVCT had thrived. Increased membership and ticket sales enabled SVCT to afford rental warehouse space for rehearsals, storage, and set construction. Increased financial security had enabled SVCT to stretch itself, staging more challenging productions. This, in turn, has drawn additional acting and production staff talent from a broad geographic area and attracted larger audiences.

The 2018-2019 season was kicked off with a first ever SVCT members’ whirlwind tour of New York and Broadway. (Read about our 50th Anniversary Broadway Tour.) The season’s shows were selected from past favorites. And, a 50th anniversary gala celebration, held in January, 2019 was a festive, celebratory event. 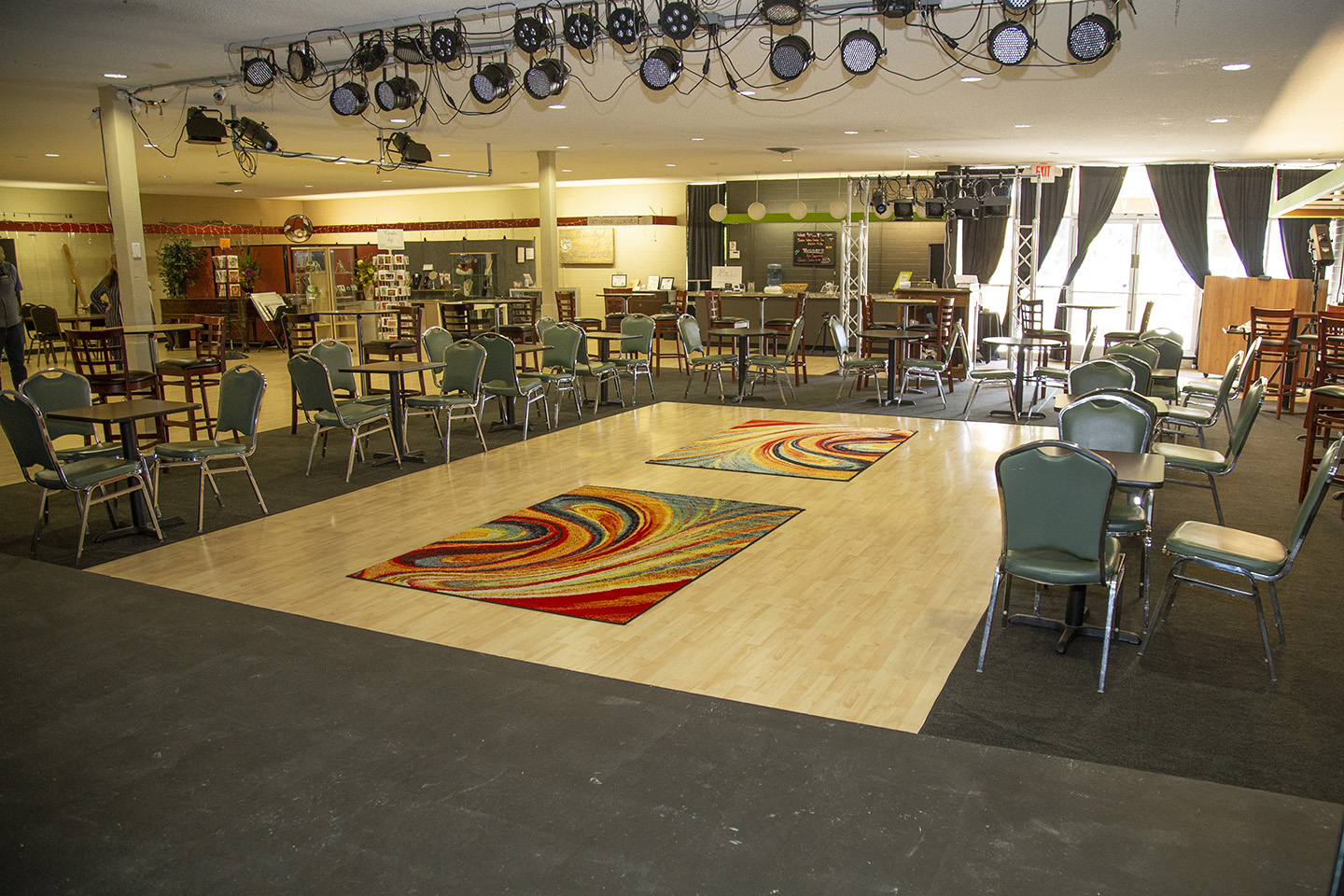 Effective January 2020, SVCT  assumed management of a second performance venue, Limelight, a unique 50-seat “bring your own dinner & wine” space at the Gilroy Center for the Arts conceived of and executed for its first 9 years by Kevin Heath and Alan Obata. The opportunity to produce small shows in an intimate performance setting—one that encourages friends and to-be-friends to mingle and enjoy the ambience and camaraderie of the environment—wonderfully complements SVCT’s traditional five show season at the larger Morgan Hill Community Playhouse. Read “Back in the Limelight.”

SVCT seeks to maintain Limelight’s vision and expand on some of the infrrastructure details. In 2020 we used a generous grant from the Gilroy Foundation to upgrade the lighting. We also reconfigured the theater with a “thrust stage”, thus enabling seating on three sides of the stage and minimizing audience distance from the stage. Unfortunately audience enjoyment of these upgrades was delayed because of the pandemic…. SVCT’s first show at Limelight was scheduled to open a week after the shut-down!

The performing arts were particularly hard hit by the pandemic. SVCT cancelled the second half of its 2019-2020 season, all upcoming Limelight productions, and the entire (already announced) 2020-2021 Playhouse season. To partially defray ongoing expenses (particularly monthly warehouse space rental) through donations, SVCT launched a free online series of plays featuring a broad range of local actors and directors. Some productions used “green screen” technology, others utilized simple sets at Limelight, and others were through “Zoom”, with different actors performing in their own screens. Read “The Show Must Go On.”  A big thank you to our community for supporting us through this challenging time!

SVCT is proud of our accomplishments and looks forward to an exciting future. With two performance venues, the opportunity to provide a broader range of shows has expanded. SVCT anticipates continuing to stretch and grow, with diverse, challenging, high quality productions, continued extensive community commitment and involvement, and delighted audiences.