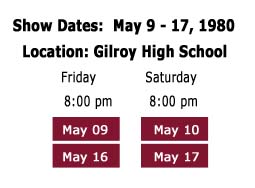 This Noel Coward classic is the story of a refined English gentleman whose life becomes haunted by the reappearance of his former wife’s spirit, after a séance conducted in his home. Hilarious complications arise when the medium, Madame Arcati, is unsuccessful in her attempts to return the spirit to the other world.

Following the closing night performance, the Theater Angels Art League will host a champagne reception for the cast at 50 W. 5th Street.