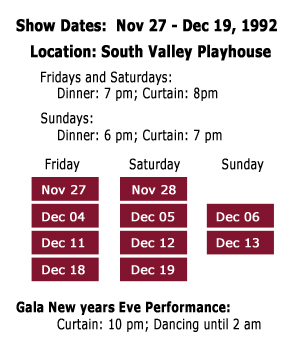 The 1940?s Radio Hour takes the audience on a nostalgic trip down memory lane into a backdrop of the second World War, setting the stage for swinging big band music and song and old fashioned situation comedy of a bygone period. The show takes place during a live broadcast of WOV., a local 5,000 watt New York City radio station. It centered around 14 performers and their attempts to make it to the big time, as seen through the eyes of a 1940′s radio station studio audience. This nostalgic trip down memory lane included such songs as Boogie Woogie Bugle Boy, Ain’t She Sweet, and Blue Moon.