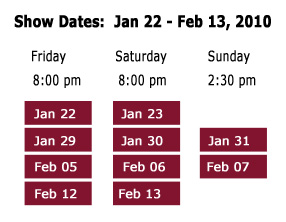 Based on the comic strip Li’l Abner created in 1938 by Al Capp, the show is, on the surface, a broad spoof of hillbillies — but it is also a pointed satire taking on any number of topics, ranging from an incompetent United States federal government to standards of masculinity. Performed by our talented teens!   (G)