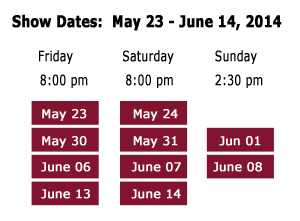 Loaded with contemporary jazz, this side-splitting comedy is set in the glamorous, seductive Hollywood of the 1940’s. In a world of film studios and flimsy negligees, the show chronicles the misadventures of Stine, a young novelist, attempting to convert his novel into a screenplay for movie producer/director, Buddy Fidler. Alongside the enactment of Stine’s personal story, every scene that he writes for the screenplay is acted out onstage. So we also see a 1940’s private eye tale of decadence and homicide with a liberal sprinkling of femmes fatales. The two stories, real and reel, collide and crescendo, releasing the audience with the best of Hollywood conventions; a happy ending.