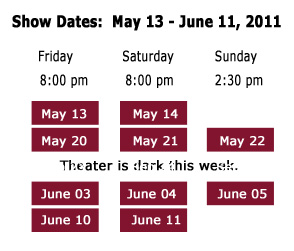 Curtains is parody of 1950s “whodunnit” theater mysteries, set in Boston in 1959. The plot is set in motion when the star of a disastrous 1950s cowboy musical, Robbin’ Hood, is murdered on opening night. A theater-loving detective, Lieutenant Frank Cioffi, is assigned to solve the crime. As one murder turns into a series of murders, the cast is forced to stay inside the theater while Cioffi unravels the mystery. During his investigation family dysfunction, romance, aspirations to stardom, and a desperate attempt to save a terrible show carry the audience along through a hilarious and terrifying mystery.

Story based on a book by Peter Stone.
Adaptation by Rupert Holmes.
Lyrics by Fred Ebb and music by John Kander.